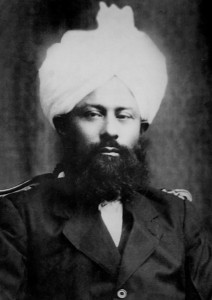 Hazrat Mirza Bashiruddin Mahmood Ahmad, the promised son, was the second Khalifa of Ahmadiyya Jama’at. At the death of Khalifatul Masih I, at asr prayer Nawab Muhammad Ali Khan, a sahabi and the son-in-law of the Promised Messiah, read out the will of Hazrat Khalifatul Masih I and requested the people to act accordingly and elect someone as his successor. On this Maulana Syed Ahsan Amrohvi proposed the name of Hazrat Sahibzada Mirza Bashiruddin Mahmood Ahmad. He was hesitant and refused at first, but on the fervid persistence of the people, realised that it was the verdict of Allah and accepted the oath of Allegiance of the Ahmadis and thus became the Second Successor to the Promised Messiah (peace be on him). He served in that capacity for 52 blessed years from March 14, 1914 to November 7, 1965.

He is also known as the ‘Musleh Maoud’, as prophesied by the Holy Prophet (peace and blessings of Allah be on him), of a spiritual, pious, and Promised son of Mahdi at a time when Islam would be at a stage of decline and depression. He had prophesied he would come with a mission to revive and strengthen the Islamic theology and, through him, Islam, would resurge on the surface of the Earth. The Holy Prophet (peace be upon him) called this Holy Spiritual son as the Musleh (Reformer), and the Promised one.

One of his most important achievements was the founding of a strong system for propagation and preaching of Islam within the country and abroad. In this respect he took many steps, he established:

Allah had granted him a deep encyclopaedic intrinsic spiritual knowledge and understanding of the Holy Quran, thus fulfilling the prophecy that through him the glory of Islam and the dignity of Quran would be convincingly established. He had said that there were hundreds and thousands of truthful realities of the Holy Quran which Allah has disclosed on him with His special grace through intuition and revelation. (Tafsir-e-Kabir, Vol. 6, pg. 483)

He had also declared that he was bestowed with such a meaningful wisdom of the Holy Quran that, if anyone, with whatever knowledge and following whatever religion, criticised the Holy Quran, by the grace of Allah, he would convincingly silence and satisfy him through Quran alone. He also wrote two of the most enlightening commentaries on the meaning and understanding of the Holy Quran titled ‘Tafseer-e-Kabeer’ and ‘Tafeer-e-Sagheer’.

Hadhrat Mirza Ghulam Ahmadas was blessed with a son on January 12, 1889, he was named Mirza Bashiruddin Mahmud Ahmad. It was this son who was born of the prophecy of the Holy Prophet (peace and blessings of Allah be on him). received his education in the District Board Primary School and, later in 1898, in Taleemul Islam High School when it was started. Nevertheless, in his student life he was never interested in routine book knowledge, and could not succeed in the Government Entrance Examination. This was the end of his formal education, which was not merely incidental, but a great miracle of the Divine Destiny. Incidents later proved that the Lord Almighty Himself wanted to be his teacher. Thus the world witnessed that he not only had intrinsic and spiritual knowledge but his insight into basic wisdom was so vast and deep that, however, learned a scholar, armed with whatever worldly knowledge attacked Islam he would prove to be a mere academic novice. Thus the fulfilment of the divine revelation became manifest. “Would abound in the Wisdom of the Explicit and the Intrinsic”

He was only 19 years old when the Promised Messiah (blessings Allah be on him) passed away. He was the first member of the Jama`at to take oath of allegiance at the hands of Khalifatul Masih I, who became his mentor and teacher.

He survived an attempt on his life in 1954, but he was seriously wounded in his neck. He went to Europe in 1955 for medical treatment. Due to his heavy workload and the effects of the wound in the neck, his health continuously declined and at last, on November 8, 1965 passed away at the age of seventy seven.