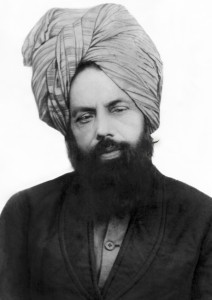 he Ahmadiyya Muslim Jamaat is a dynamic, fast growing international revival movement within Islam. Founded in 1889, it spans 202 countries with membership exceeding tens of millions. Its current headquarters are in the United Kingdom.

Ahmadiyya Muslim Jamaat is the only Islamic organization to believe that the long-awaited Messiah has come in the person of Mirza Ghulam Ahmad(as) (1835-1908) of Qadian. Ahmad(as)claimed to be the metaphorical second coming of Jesus(as) of Nazareth and the divine guide, whose advent was foretold by the Prophet of Islam, Muhammad(saw). Ahmadiyya Muslim Jamaat believes that God sent Ahmad(as), like Jesus(as), to end religious wars, condemn bloodshed and reinstitute morality, justice and peace. Ahmad’s(as) advent has brought about an unprecedented era of Islamic revival. He divested Islam of fanatical beliefs and practices by vigorously championing Islam’s true and essential teachings. He also recognized the noble teachings of the great religious founders and saints, including Zoroaster(as), Abraham(as), Moses(as),Jesus(as), Krishna(as), Buddha(as), Confucius(as), Lao Tzu and Guru Nanak, and explained how such teachings converged into the one true Islam.

Ahmadiyya Muslim Jamaat is the foremost Islamic organization to categorically reject terrorism in any form. Over a century ago, Ahmad(as) emphatically declared that an aggressive “jihad by the sword” has no place in Islam. In its place, he taught his followers to wage a bloodless, intellectual “jihad of the pen” to defend Islam. To this end, Ahmad(as)penned over 80 books and tens of thousands of letters, delivered hundreds of lectures, and engaged in scores of public debates.

His rigorous and rational defences of Islam unsettled conventional Muslim thinking. As part of its effort to revive Islam, Ahmadiyya Muslim Jamaat continues to spread Ahmad’s(as) teachings of moderation and restraint in the face of bitter opposition from parts of the Muslim world.

Similarly, it is the only Islamic organization to endorse a separation of religion and State. Over a century ago, Ahmad(as) taught his followers to protect the sanctity of both religion and government by becoming righteous souls as well as loyal citizens. He cautioned against irrational interpretations of Qur’anic pronouncements and misapplications of Islamic law. He continually voiced his concerns over protecting the rights of God’s creatures.

Today, it continues to be an advocate for universal human rights and protections for religious and other minorities. It champions the empowerment and education of women. Its members are among the most law-abiding, educated, and engaged Muslims in the world.

Ahmadiyya Muslim Jamaat is the only Islamic organization with a central spiritual leader. Over a century ago, Ahmad(as) reminded his followers  of God’s promise to safeguard the message of  Islam through khilafat (the spiritual institution of  successorship to prophethood). It believes that only spiritual successorship can uphold the true values of Islam and unite humanity. Five spiritual leaders have succeeded Ahmad(as) since his demise  in 1908. Its fifth and current spiritual head, Mirza Masroor Ahmad, resides in the United Kingdom.  Under the leadership of its spiritual successors, Ahmadiyya Muslim Jamaat has now built over 15,000 mosques, over 656 schools, and over 30 hospitals. It has translated the Holy Qur’an into over 70 languages. It propagates the true teachings of Islam and the message of peace and tolerance through a twenty-four hour satellite television channel (MTA), the Internet (alislam.org) and print  (Islam International Publications). It has been at the forefront of worldwide disaster relief through an independent charitable organization, Humanity First.