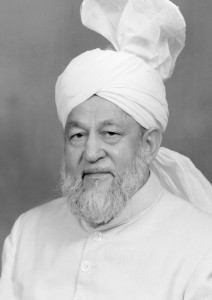 Hazrat Mirza Tahir Ahmad(ra) was the fourth Kahilfa of the Ahmadiyya Jama’at. He was elected to this position on June 10, 1982 after the demise of Hazrat Mirza Nasir Ahmad(ra).

“I am now advanced in years and would soon pass away, But those who live would witness the advent of Servants of the faith born in this wedlock with a Syeda as occurred before. This is my resolute conviction.”

And so this Servant of the faith was born on 18th December, 1928. He grew up righteous and virtuous under the guidance of his illustrious father and devout mother, with divine blessings. Once, during his childhood, he was asked by a well-know Ahmadi Savant, Maulana Abdul Rahim Nayyer, “Which reward would you cherish most for doing good work?” “Allah – Only Allah” was the 10 year old’s spontaneous answer.

The blessed personage was named Hazrat Mirza Tahir Ahmad(ra). His erudition encompasses wide range of knowledge both spiritual and secular. After graduation, he obtained the “Shahid” degree from Jamia Ahmadiyya (Theological Academy) at Rabwah. Then he studied in Europe for two and half years.

Life as a Devotee

He dedicated his life to service of faith immediately after completion of his education. He served the Jama’at at various levels including in-charge Waqf-e-Jadid, Vice President and then President of Khuddam-ul-Ahmadiyya (Ahmadiyya Youth Organization), President of Majlias Ansarullah, Director of Fazl-e-Omar Foundation. He was very concerned with Jama’at’ s progress into scientific and educational fields, he was the patron of Ahmadiyya Association of Architects and Engineers. Allah had bestowed upon him an extraordinary talent of speech and writing. He was a prolific speaker, author and poet. He was blessed with a deep understanding of the Holy Quran and Hadith, under his auspices the Holy Quran’s Urdu and English translations were revised.

Jama’at Ahmadiyya faced a new and heightened level of state led persecution, after the promulgation of the Ordinance XX of 1984 by Ziaul Haq. The level of persecution grew so much that it became nearly impossible for Huzur to execute his duties as a Khalifa of Islam without violating the worldly laws of Pakistan. He then decided to migrate to United Kingdom and thus he landed in UK on April 30, 1984, thus taking the headquarters of Jama’at from east to west. This was another blessing of Allah to give Jama’at an open playing field to preach the true and pristine teachings of Islam to the rest of the world.

The promised Messiah, Hazrat Mirza Ghulam Ahmad(as) had a revelation from Allah, the Exalted:

This prophecy was fulfilled with a grand manifestation when Hazrat Kahlifatul Masih the IV(ra) inaugurated the Muslim TV Ahmadiyya (MTA) in 1994. This is a 24/7 free to air TV channel focused on spreading the peaceful teachings of Islam via various format of programing. Started as one channel in Urdu language MTA from UK, has evolved into an 8 channel station in 7 different languages, telecast live from UK, USA and Africa hence providing a global coverage round the clock. The programming includes the live weekly Friday sermon from the Khalifatul Masih, programs in spiritual and secular education – in the form of Dars Quran, Q/A sessions on faith matters, language learning programs, cooking classes etc.

The UK migration of the Khalifatul Masih opened infinite doors for him for spreading the message of Ahmadiyyat and Islam, one such form was travelling to many countries in the world, which otherwise would have been difficult. In 1985 he visited European countries – but in 1988 he went on to the very first African tour, during this visit he covered six countries and received a tumultuous welcome in Gambia, Sierra-Leone, Liberia, Ivory Coast, Ghana and Nigeria. In many countries he was offered the full state protocol. Returning from this trip Huzur proclaimed, “I perceive light not darkness in this continent”. He also toured various countries throughout Europe, South-east Asia, Far East, Australia and the North American countries in strengthening the hold of Jama’at and spreading the message of peace and harmony during his twenty-one years of Khilafat.

He was born in Qadian (India) and grew up in Qadian and then migrated to Rabwah (Pakistan) in 1947. He received early education in Qadian and Rabwah and then Government College Lahore and Punjab University. He got higher education from Europe, and then he decided to dedicated his life for service of Jama’at. He was married and was blessed with four daughters. He was very passionate about health and was an avid squash player. His hobbies included photography and poetry. He was a prolific writer and author of many scholarly works, he published more than eight books in English and seven in Urdu.

Present leader of Ahmadiyya Muslim Jama’at worldwide, Hazrat Mirza Masroor Ahmad(aba), was elected to the position of Khalifa on April 20, 2003 as his successor. He currently resides and works from UK.

Blessed are those who take heed of divine signs, recognise the Reformer of the Age and come together under the banner of the Holy Prophet (peace and blessings of Allah be upon him) and those who are steadfast in their allegiance to the institution of Khilafat.