His Holiness’ International Visits in 2013

The objective of the visits of Hazrat Khalifatul Masih Vaba is to consolidate the spiritual training of his Community, for which His Holiness leads prayers and draws attention of the Community towards matters of importance. For members, a highlight of this visit is the honour of having a private audience with His Holiness, during which members seek advice on personal matters, support and prayers of their revered leader.

His Holiness spends considerable time with the students of the Community, both boys and girls during his visits, who are studying various topics including science, history etc. to guide them. The objective is to inculcate righteousness in the youth and train them on becoming good Ahmadi Muslims who understand their role in society and are successful in life.

Throughout his travels, His Holiness is interviewed by various media outlets. This serves the purpose of disseminating true teachings of Islam. Further, in his meetings with various officials, such as Ministers, Mayors, Senators and also the general public, to understand their point of view and also so that he can explain various aspects of Islamic teachings to demonstrate their peaceful and compassionate nature and provide solutions to their issues and concerns. 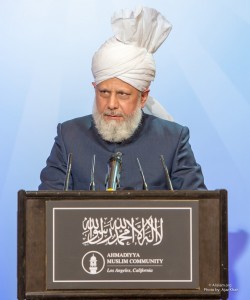 Hazrat Khalifatul Masih Vaba undertook a historic tenday trip to the West Coast of the United States for the first time since his election to the office of Khilafat. During his stay, His Holiness met over 900 members individually, interviewed with The Wall Street Journal and Los Angeles Times. During the interviews, he stated his purpose of visit to the United States was only to meet with the members of His Community and advise them towards reformation.

During his keynote address at a special reception held in his honour at the Montage in Beverly Hills, LA on May 11, 2013, he said the American people had no reason to fear Islam because it was a religion that advocated peace, universal human rights and a respect for human dignity. His Holiness also used his address to implore everyone to view Islam through the lens of justice, rather than through the acts of extremists.

His Holiness gave examples from the life of the Holy Prophet Muhammadsa to illustrate the Prophet’s love for all of mankind and his unparalleled levels of compassion, tolerance and justice. Regarding establishment of peace in the world, His Holiness said:

“The key to peace is to stop cruelty and oppression wherever it occurs with justice and equality. Only when this principle is followed will global peace develop. This will only happen when the people of the world come to recognise their Creator. It is my ardent hope and prayer that the entire world urgently comes to understand the needs of the time before it is too late.”

This event was attended by more than 300 people, including government officials, academics, community leaders, as well as California Lieutenant Governor, mayoral candidate Eric Garcetti, and several members of the United States Congress. 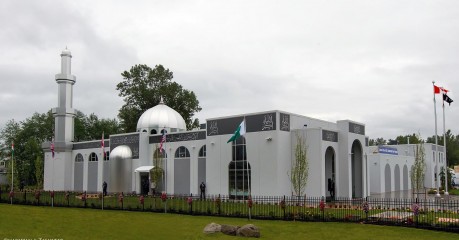 The Supreme head of the Ahmadiyya Muslim Community visited Canada from May 15th to 27th, 2013. His stops included Vancouver and Calgary. During his visit, he inaugurated the first Ahmadiyya Muslim Mosque in Vancouver, Baitur Rahman. Addressing the audience in attendance, he said:

“I … proclaim and declare that this Mosque will prove to be a source of spreading love, affection, peace and brotherhood for all people irrespective of whether they are Ahmadi or non- Ahmadis or whether they are Muslim or non- Muslims. The doors of our Mosque will always be open to the people of all religions, because this Mosque is a means of manifesting God’s grace, mercy, love and compassion for mankind.”

In Calgary, His Holiness met with the members of Alberta’s Legislative Assembly at Baitun Noor Mosque. Additionally he met with members of the press and other dignitaries from Calgary. He summed up the purpose of his visit by stating:

“When I meet members of my Community I listen to their problems and do my best to resolve their concerns. Whenever I meet those who are not from my Community I promote the message of peace.”

His Holiness met the Mayor of Calgary, Mr Naheed Nenshi, and discussed matters of mutual interest and thanked Mr Nenshi for his kind comments that Ahmadis integrate well with the local community.

In June 2013, the Supreme head of Ahmadiyya Muslim Community visited Germany. During this visit, he presided over the Annual Convention and laid the foundation stone for Baitul Hameed Mosque in the town of Fulda. In response to a question from reporter about integration with German culture, His Holiness responded that Ahmadis are instructed to integrate and serve the local community, while adhering to their religious values. He explained that there are some aspects of German culture that we will be happy to adopt.

During the inauguration of the annual convention, His Holiness said:

“We cannot bring the people of the world closer to God until we have established a strong bond with Him. And we cannot fulfil the rights of humanity until we develop within ourselves a spirit of truthfulness, love, brotherhood and selflessness.”

In Autumn of 2013, Hazrat Mirza Masroor Ahmad embarked on a seven week journey which took him to Singapore, Australia, New Zealand and Japan.

In his keynote speech in Singapore, he spoke about the economy and need for equity between nations. He said:

“Alliances or friendships with particular nations should not be a determining factor in deciding whether to assist other countries…the goal should be to help others stand on their own two feet. Unjust conditions should not be placed, whereby countries are not helped until they fulfil certain demands…”

Further, he expressed his concerns regarding an increasing risk of a Third World War:

“If we look back at history, we realise that a major factor that led to the first two World Wars was the prevailing economic situation…If such circumstances were to prevail again it would be extremely difficult to predict who would be safe and who would be in danger. We can only pray and present the facts and realities in front of everyone in an effort and hope that the world can be saved from all forms of destruction and danger. This is essential so that we are not looked upon with anger and as transgressors by our future generations.”

The reception was attended by such notables as Mr Lee Khoon Choy, a founding member of Singapore’s ruling People’s Action Party. 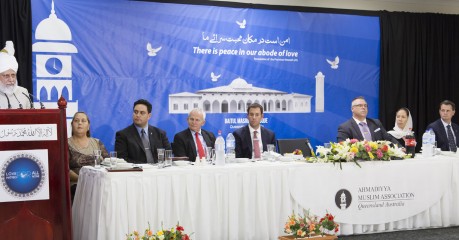 During the second leg of his journey, His Holiness visited Australia. Apart from attending the Annual Convention and speaking to many famed journalists, he inaugurated the newly built Masroor Mosque. He also delivered a key note address at Princess Reception Centre.

His Holiness stressed the importance of mutual unity and love to tackle the unrest in the world. He explained Islam’s core teachings of mutual respect by saying:

“Human beings are the greatest of all of God’s Creation and so Allah the Almighty desires for mankind to respect and honour one another. This is why the Holy Qur’an, which is the sacred book for all Muslims and according to our beliefs the final law-bearing book, is filled from cover to cover with commandments requiring mankind to fulfil the rights of one another.”

Regarding establishment of absolute justice and world peace, His Holiness said:

“Where decisions are made according to true principles of equity and where the rights of all people are fulfilled only peace and harmony will be found and this golden principle given by the Qur’an is not only for Muslims, but in fact it is a universal truth that in order to establish peace, justice must prevail.”

Many opportunities were presented to deliver the true peaceful message of Islam, such as Newspaper editorials, interviews that appeared in print and on and radio.

The third leg of his journey took him to New Zealand. Apart from inaugurating the Annual Convention of New Zealand, His Holiness delivered a historic address at New Zealand’s National Parliament in Wellington. During his address, he advocated the urgent need for justice as a means to develop world peace in the face of increasing tensions and conflicts in various parts of the world. Indeed, His Holiness deemed the establishment of world peace as “the critical need of the time”.

One of the key highlights of his visit was the official release of Holy Qur’an translation done in Maori language, which is the language of indigenous citizens of New Zealand.

Final stop on this seven week journey was made in Japan. Amongst other engagements, His Holiness addressed a press conference attended by more than 64 journalists and media members and also delivered a keynote address on Islam, Terrorism and the Qur’anic principles of peace, at an historic reception held at the Mielparque Hotel in Nagoya. 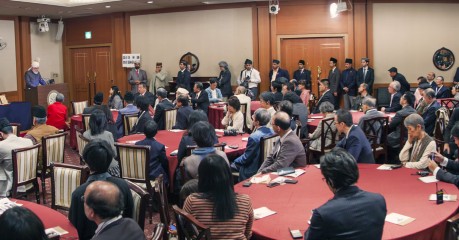